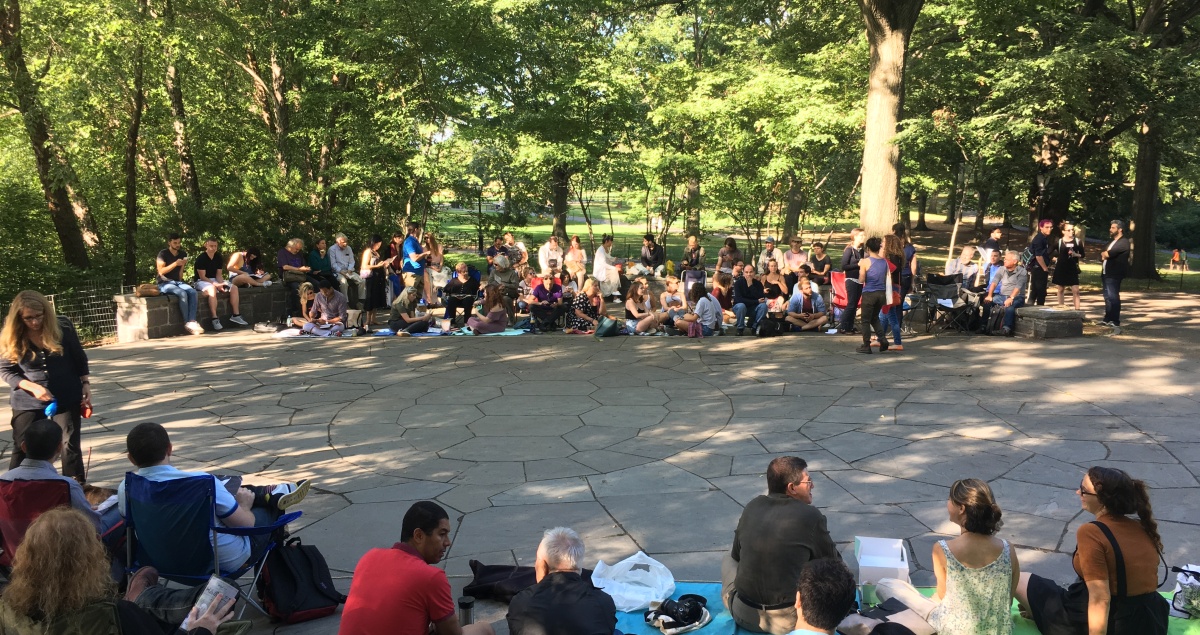 Someone Is Naked in the State of Denmark

Four weeks ago, any New Yorker looking for a free Shakespeare fix might head to the Delacorte Theater in Central Park, where they would find a star-studded production of A Midsummer Night’s Dream playing inside an intricate Fairyland. One month before that, they would find a controversial staging of Julius Caesar, starring a Trump look-a-like and the occasional conservative protestor. Today, however, Central Park’s preeminent offering of free Shakespeare features something audiences can’t find anywhere else – full frontal male nudity.

A nude production of Hamlet featuring a cast of all-male actors enjoyed a two-day engagement in front of the King Jagiello monument in Central Park this week. The play was produced by Torn Out Theater, a year-old company whose debut work was a nude production of The Tempest featuring an all-female cast last August.

On Friday, September 8, an audience trickled in before the 5 p.m. performance, setting up lawn chairs and picnic blankets around the stage. The “stage”, in this case, consisted of a paved round clearing and a stretch of pedestrian walkway between the statue of the Polish king and Turtle Pond.

To accommodate a larger audience, Torn Out Theater moved its production of Hamlet to this spot for September 7 and 8, after presenting four shows in Prospect Park this August.

As audience members chatted and took pictures of the pond, Belvedere Castle, and the empty Delacorte Theater on the other side of the water, it was unclear just how many of them knew what they were getting into.

Rocheleh Ziffer, who had moved to New York from Australia five days earlier, was spending a free afternoon wandering around Central Park for the first time. “I just saw the sign saying ‘Free Admission’ and was like, ‘Sweet! Until I get a job I need all the free things I can get.’”

As for the more controversial element of the show, Ziffer was walking in blind. “It’s a performance of Hamlet,” she says. “That’s all I know.”

When Ziffer learns that she won’t just be sitting down to two and a half hours of Shakespeare, but two and a half hours of nude Shakespeare, she breaks into laughter. And then she learns that the show will only feature male performers, including the actors portraying female characters. “Is that weird?” she asks. “Do I look like the biggest creep now?”

Director and Torn Out Theater co-founder Pitr Strait doesn’t hit you with the full frontal from the get-go, and not every character gets fully nude. Those who do shed their layers, do so at a point of emotional vulnerability, a moment of honesty, or in a spell of madness.

For Shakespeare novices, a basic understanding of Hamlet’s character can be had from the observation that once Hamlet gets nude early in the first act, he stays that way until the final bows.

Of the two female characters in the play, only Ophelia undresses completely. After her father dies, Ophelia finally bares her true emotions, and in this production, the full male form.

The deceitful and villainous King Claudius, on the other hand, only takes his shirt off for a brief scene, and for the rest of the play, dons a drape-y costume with many loose layers.

In a show about lies, deceit, and power hungry men, Strait says, emotional nakedness is what sets Hamlet apart. “At some point, he says, ‘Fuck it. I’m just gonna be who I am, I’m not gonna pretend, I’m not gonna throw off my inky cloak, I’m not gonna smile cause my new dad tells me to, I’m gonna be myself, I’m gonna get to the truth’,” Strait explains.

When the actors exited a scene or awaited their next entrance, they either stayed behind the curtain at the King Jagiello statue, or huddled naked in a roped off section of bushes behind the stage, on the edge of Turtle Pond. From across the pond, the view of that section of bramble may have given an onlooker quite a different impression of what was going on over here.

While most New York theaters’ biggest audience etiquette problems include crinkly candy wrappers and texting during the show, the company of Torn Out Theater’s Hamlet could control very little about its surroundings.

What qualified as “upstage” was essentially an ordinary paved walkway in Central Park. While ushers attempted to keep passerby out of the makeshift stage, some determined pedestrians refused to be rerouted.

One usher pleaded loudly with a middle-aged woman to keep her from crossing the stage in the middle of a scene between Hamlet and Polonius. The woman ignored the usher, striding through the scene, not looking up from her phone as a nude Hamlet ran right in front of her.

At other times, a man wearing headphones walked through a fight scene between a naked Hamlet and Laertes; a group of people interrupted a somber moment during Ophelia’s funeral scene; and a young man on a skateboard rolled past the stage while laughing, causing Strait to gesture at him with both of his middle fingers.

Unlike Ziffer or any puzzled onlookers, some audience members knew what they were walking into, and braced themselves for the nudity ahead. Still, they weren’t quite sure how it would figure into the play.

“I knew about it going in, but I thought it was surprisingly well-done,” says Billy Cohen, an actor and friend of Jake Robertson (Hamlet), after the play. “I was expecting it to be, I don’t know, weird.”

Jeuel Pana, a graduate student in public health at NYU, came with a friend, looking for something free and different to do for the weekend. While he appreciated the performance, Pana also found it absurd. “I was probably laughing the whole time, but trying not to be obvious,” he says.

What started out last year as an effort to promote female body positivity in The Tempest, turned into something of a dare for Strait and Torn Out Theater’s co-founder Alice Mottola to do the same for men. After The Tempest, they were asked, ‘why not do an all- male production next?’ “That was a very easy challenge to accept,” Strait says. He recalls telling his critics, “We’ll absolutely do that.”

For Robertson, the “absolutely” came after a long discussion with Strait about how the nudity would factor into Strait’s production. “I wanted to make sure it was trying to bring the story to life in a different way, and it was a part of the life of the play,” Robertson says.

The challenge of appearing nude for nearly all of the two-and-a-half-hour-long play was matched only by the daunting prospect of doing a character as monumental as Hamlet justice – something Robertson hadn’t fully considered until after he agreed to the nudity. “Then it was like, ‘oh shoot, now I have to be Hamlet’,” he says.

Robertson doesn’t deny being nervous to bare everything in front of the audience.
The actor eschewed the traditional brooding, antisocial interpretation of the unfortunate prince, portraying Hamlet instead as energetic and impassioned. After the play, Robertson is animated in a different way, hugging his friends and his mother goodbye, and re-enacting an awkward collision with a pedestrian during his first nude show in Prospect Park.

Strait’s Hamlet lost one or two-dozen audience members during intermission, but throughout the play, some baffled passerby turned into attentive viewers, keeping the size of the audience roughly the same, at around one hundred people.

For some audience members, the nudity was an insightful interpretation of the play. “I thought it was basically kind of indicative of Hamlet’s unraveling, and kind of the way that spread through the setting, which I found was accurate,” says Cohen.

Pana, however, had doubts. “It’s a serious play, but then they’re nude,” he says. “I’m not sure, do we take them seriously or not?

Strait and Robertson were always prepared for skeptic audiences. “I think a lot of people who come to this show are probably like, ‘this is just some gimmick that they’re doing’,” Robertson says.

But Strait experienced some validation when he read the review of another production of Hamlet this summer. Oscar Isaac and Keegan-Michael Key starred in a sold-out and critically acclaimed production of Hamlet at the Public Theater, and though Strait didn’t know it before staging his version, the two productions shared more than a common text.

In a review of Hamlet at the Public, The New York Times theater critic Ben Brantley wrote, “I totally bought Hamlet’s running around in his underpants for his ‘antic disposition’ scenes.”

“At first I was like, ‘oh no, they did it,’” Strait said of the moment he read Brantley’s review. “But then I think it was my wife actually who was like, ‘no, this means that you’re not crazy. You didn’t just make up a gimmick for this, other people are working on the same wavelength, it’s just you’re gonna go all the way with it.’”

There was no clear consensus on Torn Out Theater’s Hamlet, though if the sizeable turnout indicated anything, it was at least an interest in free Shakespeare, nude Shakespeare, or both.

Jared Kirby is no stranger to a good fight. In a day full of combat lessons, stunt coordination, and fencing practice, Kirby runs from one location to another, all to get in a full day’s worth of fighting. Kirby is an internationally recognized fencing master and has trained actors and martial artists for off-Broadway plays and well-known films and television shows. Violence, he says, is not just a visual effect, but an important storytelling tool and means of character development. Through teaching seminars around the world, coordinating fights on screen, and mentoring up-and-coming fight directors, Kirby has devoted his life to teaching others to see violence as the art that it is.